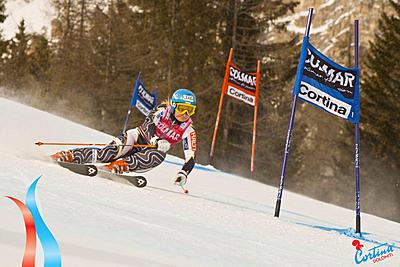 Skiing in the Italian Alps

Cortina d’Ampezzo , commonly referred to as Cortina, is a town and comune in the heart of the southern Alps in the Veneto region of Northern Italy.

Cortina d’Ampezzo commonly referred to as Cortina, is a town and comune in the heart of the southern (Dolomitic) Alps in the Veneto region of Northern Italy. Situated on the Boite river, in an alpine valley, it is a popular winter sport resort known for its skiing trails, scenery, accommodation, shops and aprÃ¨s-ski scene, and for its jet set and aristocratic European crowd.

In the Middle Ages, Ampezzo fell under the jurisdiction of the Patriarchate of Aquileia, and of the Holy Roman Empire. In 1420, it was conquered by the Republic of Venice. It then spent much of its history under Austrian rule, briefly undergoing some territorial changes under Napoleon, before being returned to Austria, who held it until 1918. From the nineteenth century, Ampezzo became a notable regional centre for crafts. The local handmade products were appreciated by early British and German holidaymakers as tourism emerged late nineteenth century. Among the specializations of the town were crafting wood for furniture, the production of tiled stoves and iron, copper and glass items. Today, the local economy thrives on tourism, particularly during the winter season, when the population of the town typically increases from about 7,000 to 40,000. The Basilica Minore dei Santi Filippo e Giacomo was built between 1769 and 1775 on the site of two former thirteenth and sixteenth-century churches; it is home to the parish and the deanery of Cortina d’Ampezzo. The town also contains the Rinaldo Zardini Palaeontology Museum, established in 1975, the Mario Rimoldi Modern Art Museum, and the Regole of Ampezzo Ethnographic Museum.

This location is sought after the Ski lovers from all over Europe and the world. It willl host of three races in 2017. The Cortina Classic was held January 23 – 24, 2016.