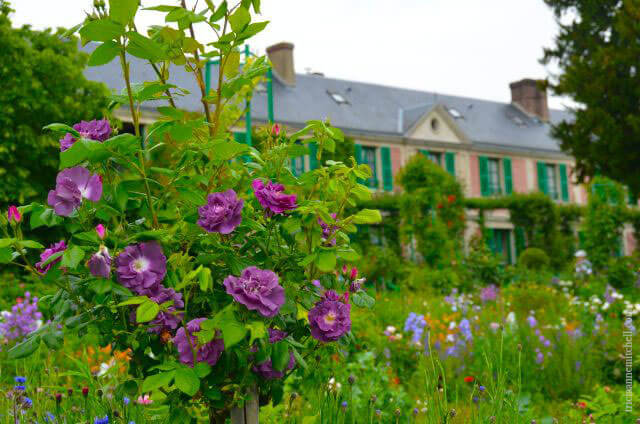 Giverny and the Monet Gardens

Approximately 80 km from Paris lies a village painted into the annals of art history by the famous impressionist painter, Claude Monet. At the gateway to Normandy, Giverny has served as inspiration for a number of artists since though Monet visibly remains its heart. Visit his restored house and gardens where sprawling flower beds and Japanese inspired water scenes wait to further inspire the artist in you. If you are curious about the art colony which followed Monet, stop by the Giverny museum of Impressionisms – but not before stopping at the Hotel Baudy. Once a center of the artistic life which thrived here, it now serves as a café and restaurant.

Versailles is beyond what any one word could describe – even “palatial” pales in comparison to the jewel-like World Heritage Site. The “Monument historique” sits about 20 km from the centre of Paris and has grown considerably since its origins as a hunting lodge for Louis the XII. Stroll the geometric gardens filled with sculptures and fountains or visit the historic, opulent Hall of Mirrorsm. The endless sights exist as a feast for eyes fit for a king.

It may not be a palace, but Mont Saint-Michel, another World Heritage Site, bears a medieval magnificence above bay waters. More than 3 million people visit the tiny island each year and are greeted with a monastery dating back to the 8thcentury. The structure itself represents the feudal society of the Middle Ages –  the top abbey speaks to the reign of God, with the great halls with stores and houses below, and the bottom being the houses of fishermen and farmers. At once a stronghold of Gallo-Roman culture, a defense both Vikings and during the Hundred Years’ War, Mont Saint-Michel stands rich with history and worth the four hour trip from Paris.

Giverny is not the only home to famous impressionists. The small, charming town of Auvers-sur-Oise is beloved by art enthusiasts for its rustic charm and deep connection to Vincent Van Gogh. Among other avant-garde artists such as Paul Cézanne and Camille Pissarro, the ‘Starry Night’ painter found peace and inspiration during his time here. In a letter to his brother Théo, Van Gogh described the town as ‘seriously beautiful’ and the striking scenes there can still be seen in works such as Church of Auvers-sur-Oise and Daubigny’s Garden. The town remains a place of remembrance for the artist and the picturesque, peaceful spots which moved him to create during his stay.

Located 40 km away from Paris, a different (decidedly American) icon invites you to a place made from more magic than mortar. Mickey Mouse awaits you at Disneyland Paris, a spot both children and adults can appreciate, with rides such as Space Mountain, Pirates of the Caribbean, and Big Thunder Mountain to enjoy. Meet your favorite Disney characters and eat to your heart’s content at restaurants like Café Mickey.Give your inner child a chance to recoup and have fun.

Another UNESCO World Heritage Site, Provins is a fortified medieval town that sits about 90 km southeast of Paris. Early every summer, the town offers a weekend-long medieval fair reenactment but continues to showcase amazing performances and activities throughout the summer season.  It is a town that does not lack for delicious food, but if you want to keep in the spirit of things, there is the Banquet des Troubadours, which upholds a more authentic medieval atmosphere