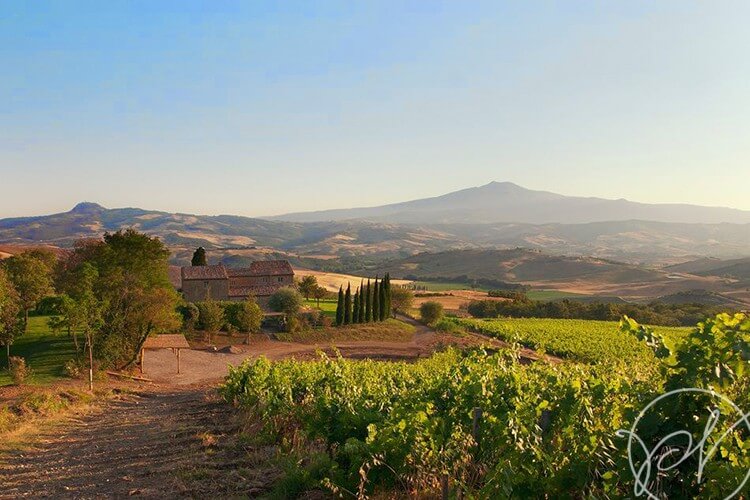 Montepulciano has always been one of my favorite towns in Italy. Perched on a hill, Montepulciano overlooks the beautiful Chiana valley and the Trasimeno lake. Once in the town you will want to walk around the outside walls, there you can see the most beautiful views of the countryside’s rolling hills, vineyards and moutains in the background.

Montepulciano, located in the Val di Chiani of Tuscany, Italy, within easy reach of the Val d’ Orcia is one of the most attractive hills towns in Tuscany. It is built on a ridge of Monte Poliziano in the province of Sienna in Tuscany. It is the ancient Etruscan city of Nocera Alfaterna, which in 308 B.C. made an alliance with Rome against the Samnites. In the Middle Ages it was under the control of Florence, but was conquered by Sienna in 1260. The main street of Montepulciano stretches for 11.5 kilometers from the Porta al Prato to the Piazza Grande at the top of the hill. The cathedral was built in 1619, from plans by Scalzo and until the 18 C it held the tomb of Bartolomeo Arragazzi, secretary of Pope Martin V, a work of Michelozzo. The church of the Madonna di San Biagio was planned by Antonio da Sangallo (1518-37).Montepulciano has always been one of my favorite Tuscan towns.

Strolling along its winding streets, we can be nicely overwhelmed by the many 1500’s palaces, the churches and its glorious Etruscan past. Its heart is the Piazza Grande, on the peak of the hill, former acropolis now framed by the most significant and remarkable monuments, such as the impressive Cathedral. The first time I was there we thought we saw the best part of Montepulciano, but obviously it wasn’t until my second visit there, that I realized I didn’t see the most beautiful part. The part from where you can see the valleys along the stone wall surrounding the town.

A great red wine is aged in the many cellars in town, the outstanding Vino Nobile di Montepulciano DOCG, whose origins date back to the 14th century.