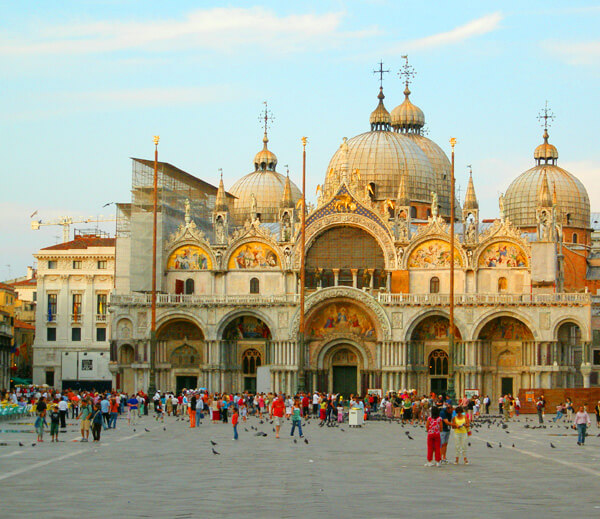 The Basilica of San Marco (St Mark’s Square) overlooks one of the most beautiful squares in the world, a real marble salon, the city center for centuries. Next to both the Basilica and the Doge’s Palace, all the most important religious and civil ceremonies have always been held there and now the Piazza San Marco is considered the city’s main symbol and tourist attraction.

This great square overlooking the water is a mixture of spaces, volumes and styles: the Procurator’s residence, the bell tower, the Doge’s Palace and the Sansoviniana Bookshop.
On Ascension day, the Doge and the city’s most important members got on board and sailed out to the Adriatic, to the Lido port. Here the Doge threw a ring, symbolizing union between Venice and water, into the sea and pronounced the solemn formula: “We wed you oh sea, in the sign of true, eternal dominion.”

I had always hoped to visit Venice, after 10 years of going back and forth to Italy, finally, we took a train from Milan to Florence and then to Venice. It was a very hot September day, the town was very crowded, too crowded. It was beautiful, unique and very interesting. The fascinating thing for me was watching the locals way of being transported to work (via boats) to the restaurants (via boats) and the most impressive observation was watching them load the groceries, luggage and everything else via boats! No one seemed annoyed or complained, as this way of life was just fine with the locals.  This is a very popular honeymoon destination, but once there, you are finally satisfied that you have seen one of the most photographed and romantic parts of Italy!