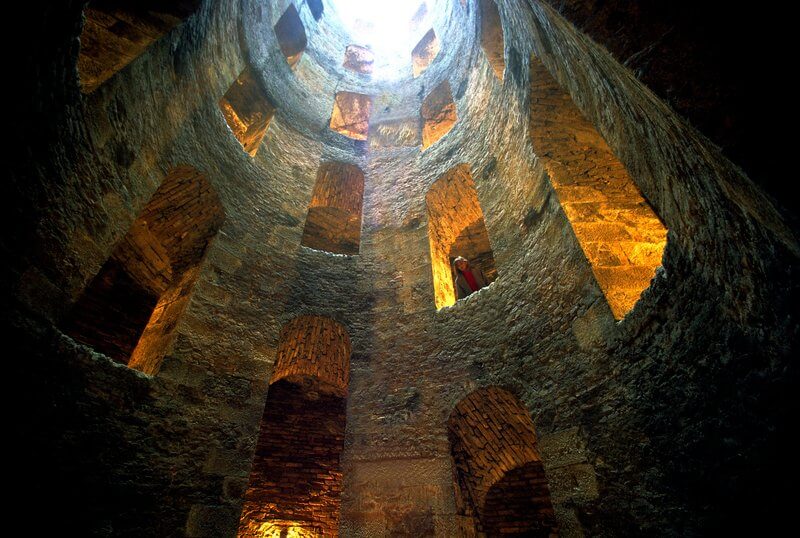 St. Patrick’s well is a masterpiece of hydraulic engineering was originally named Pozzo della Rocca (the fortress well), as it is close to the Albornoz fortress. It was later named after Saint Patrick because it was probably used as a Purgatory of Saint Patrick, in the second half of the eighteenth century, in a way similar to the underground cave where the famous Irish Saint used to retire and pray and where the unbelieving who ventured to the bottom of the cave would gain remission of sins and access to heaven.

Its construction was commissioned to Antonio da Sangallo  in 1527, at the behest of Pope Clement VII, approximately at the same time when the Pozzo della Cava underwent restoration on the opposite side of the cliff, in order to ensure water supply, should the city be under siege. Completed in 1537 under Pope Paul III (born Farnese), given its size and the accurate project layout, the well shows its ambition to be remembered as a daring and majestic enterprise.

It is a work of skilled engineering, that was preceded by hydrogeological research in order to identify the most suitable site to reach the clayey layer of the springs and tile part of the walls with bricks to improve their sealing properties. The cylindrical hole is enormous as it is 54 metres deep, and has a diameter of 13 metres; the architectural solution of a double helicoidal staircase is very interesting: It allowed the pack animals that carried water to travel undisturbed on two one-way staircases one up and one down 248 steps; the 72 large windows that filter light and let it play with the various tones of the stone wall are particularly evocative.