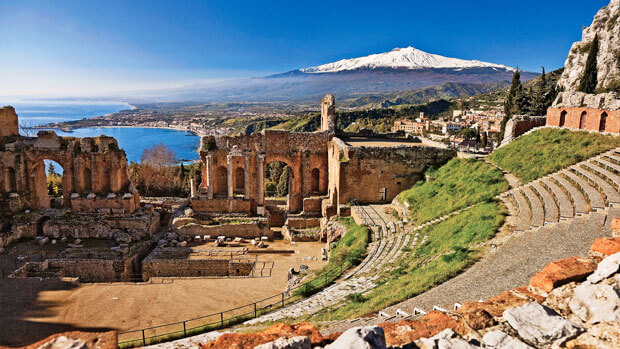 To understand and love Taormina and prior to enjoying the views from the theatre with Mount Etna in the distance and the bay of Naples down below..read on..  history.

It was built on “Monte Tauro” and was founded in 392BC. The first Punic War saw Taormina falling to the Romans in 212BC and the town became a favourite holiday spot for Patricians and Senators, thus starting Taormina’s long history as a tourist resort.

After the fall of the Roman Empire, the Byzantines came only to be ousted by the Arabs in 962. They changed the name to Almoezia and set about introducing new agricultural practices (irrigation and citrus fruit farming) and other more cerebral pursuits such as philosophy, medicine and mathematics. Taormina continued to prosper both culturally and economically with the arrival of the Normans in 1079, who, under King Roger de Hautville, threw the Arabs out of Sicily.

After a brief period of Swabian rule, under Frederick II, Charles of Anjou was pronounced King of Sicily by the Pope. The people of Taormina refused to recognise this interloper as their king and, along with a great many other Sicilian towns, joined in the revolt against French rule during the Sicilian Vespers of 1282.

A hundred years of uncertainty followed before the Spanish took over affairs. Evidently impressed with Taormina, they chose Palazzo Corvaja as the seat of the Sicilian Parliament.

The main attraction is the theatre. Now home to all manner of events, including plays, fashion shows, concerts, and cinema festivals, the Teatro Greco, as its name suggests, started its life in the 3rd Century BC hosting performances of works by Aeschylus, Sophocles, Euripides and Aristophanes.