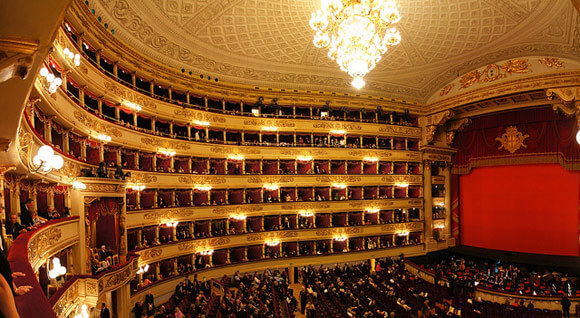 About an hour from the Villa, in Milan is the famous La Scala Opera house.

Just behind Milan’s Duomo is a cultural institution every bit as important; La Scala is the revered heart of Italian opera and the cultural heart of Milan. Pass the theatre during the opera season, which starts on 7th of December, Saint Ambrose’s Day, the feast day of Milan’s patron saint, and you’ll see the great and good of Italian cultural life alight from chauffeur driven luxury ”˜berlinas’ impeccably turned out in evening gowns and tuxedos.

La Scala is synonymous with the art of opera, an art form that in many countries has been reserved for certain social classes. Not so much in Italy, however, all manner of Italians maintain a rich knowledge of and an enthusiasm for opera, and after the best tickets have been sold, the galleries fill with ordinary Milanese, who are among the most exacting opera audiences in the world

If you are an Opera lover it is a must while nearby. An early dinner with great wine followed by an Italian opera, concert or ballet  while in Milan will make for a memorable event.

A little history, the Teatro alla Scala was founded, under the auspices of the Empress Maria Theresa of Austria, to replace the Royal Ducal Theatre, which was destroyed by fire on 26 February 1776 and had until then been the home of opera in Milan. The cost of building the new theatre was borne by the owners of the boxes at the Ducal, in exchange for possession of the land on which stood the church of Santa Maria alla Scala (hence the name) and for renewed ownership of their boxes. Designed by the great neoclassical architect Giuseppe Piermarini, La Scala opened on 3 August 1778 with Antonio Salieri’s opera L’Europa riconosciuta, to a libretto by Mattia Verazi.

La Scala’s repertory is more varied than that of the other four or five leading opera houses. It tends to include a large number of unfamiliar works balanced by a limited number of popular favourites. Conductors are given control of casting and rehearsals. The composer Giuseppe Verdi was closely associated with the house during the 19th century. Toscanini’s tenure as artistic director marked one of the finest periods in the theatre’s existence.