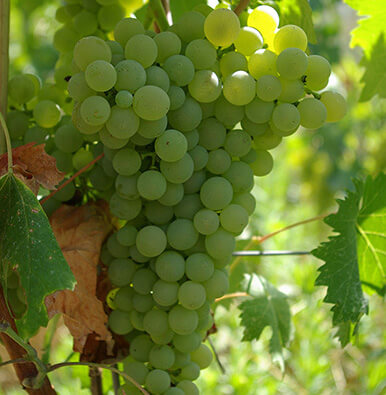 Vermentino is a light-skinned wine grape variety, primarily found in Italian wine. It is widely planted in Sardinia, in Liguria primarily under the name Pigato, to some extent in Corsica, in Piedmont under the name Favorita, and in increasing amounts in Languedoc-Roussillon. The leaves are dark green and pentagonal. The grapes are amber-yellow and hang in pyramidal bunches. The vines are often grown on slopes facing the sea where they can benefit from the additional reflected light. The Vitis International Variety Catalogue now gives Italy as its origin.

Off the Western coast of Italy, in the Mediterranean, lays the island of Sardegna.  The island has an ancient history, being controlled by the Phoenicians, the Carthaginians, the Romans, Byzantines, Arabs and Catalans.  were very curious about the Sardinian wines, especially since there hadn’t been rain in 6 months and surprisingly Sardinia typically is a dry climate. In particular, white wines that are both refreshing and interestingly poked my curiosity.

We know that Italy has many great white wines (Vino Bianco).. Vermentino is made around the Mediterranean from Spain to Italy. It is even made in California, but for me, the search for a good white wine, that does not taste of strong alcohol has been found!

Many fantastic Vermentino in the world come from Sardinia.

A little history:
The House of Savoy ruled it until the 18th century when it was annexed by Italy. Perhaps more than any of the others, the Spanish culture has left it lasting imprints on the people as it controlled Sardinia from the 14th to the 18th century. Like Sicily, Sardinia’s culture has taken all of these great empires in stride and adapted itself, taking certain bits and pieces from each one to form its own. At the same time, Sardinia is an Italian culture.

The wine industry in Sardinia is well established. Possibly the best of these wines is their Vermentino, a dry white wine. Vermentino is apparently of Spanish origin. It traveled east to Corsica before being brought to Sardinia at the later end of the 20th Century. It was originally planted on the slopes of the northern peninsula of Gallura. Today, the best Vermentinos come from there and are labeled as Vermentino di Gallura DOCG Tthe only DOCG in Sardinia.

One of my favorites that we enjoyed in Italy, refreshing on a hot summer day!