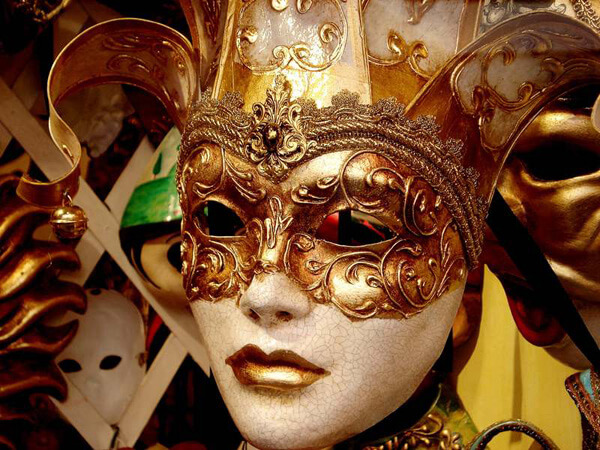 Venetian masks are a centuries-old tradition of Venice, Italy. The masks are typically worn during the Carnival,  but have also been used on many other occasions in the past, usually as a device for hiding the wearer’s identity and social status. The mask would permit the wearer to act more freely in cases where he or she wanted to interact with other members of the society outside the bounds of identity and everyday convention. It was useful for a variety of purposes, some of them illicit or criminal, others just personal, such as romantic encounters.
Venetian masks are characterised by their ornate design, featuring bright colours such as gold or silver and the use of complex decorations in the baroque style. Many designs of Venetian masks stem from Commedia dell’arte. They can be full-face masks (e.g. the bauta) or eye masks (e.g. the Columbina).

History
Near the end of the Republic, the wearing of masks in daily life was severely restricted. By the 18th century, it was limited only to about three months from December 26. The masks were traditionally worn with decorative beads matching in colour.
Types of masks
Bauta (sometimes referred as baÃ¹tta) is a mask which covers the whole face, this was a traditional piece of art, with a stubborn chin line, no mouth, and lots of gilding. The mask has a square jaw line often pointed and tilted upwards to enable the wearer to talk, eat and drink easily without having to remove the mask thereby preserving their anonymity. The Bauta was often accompanied by a red cape and a tricorn.
In 18th century, the Bauta had become a standardized society mask and disguise regulated by the Venetian government.[ It was obligatory to wear it at certain political decision-making events when all citizens were required to act anonymously as peers. Only citizens had the right to use the Bauta. Its role was similar to the anonymizing processes invented to guarantee general, direct, free, equal and secret ballots in modern democracies.
It was not allowed to wear weapons along with the mask, and police had the right to enforce

Columbina
The Columbina (also known as Columbine and Columbino) is a half mask often highly decorated with gold, silver, crystals and feathers. It is held up to the face by a baton or tied with ribbon as with most other Venetian masks. The columbine was popularised by an early actress in the Commedia dell’arte of the same name. It is said it was designed for her because she did not wish to have her beautiful face covered completely.