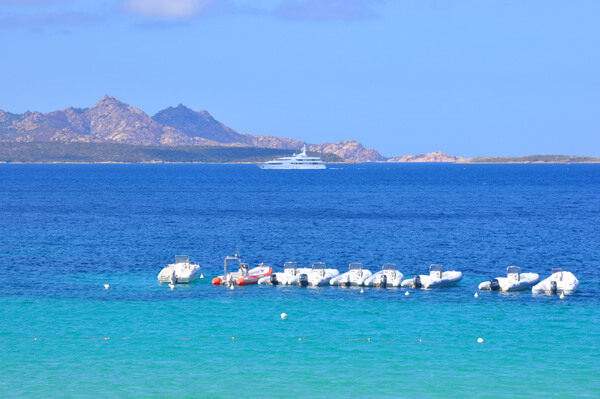 People talked about Costa Smeralda as being intensely blue, but you can’t imagine these beaches until you see them  for yourself. I have been to the Caribe Islands (15 of them or more), Mexico beaches, Mediterranean beaches and more…I consider myself to be passionate about finding the most beautiful beaches in the world. So, my curiosity took me to Costa Smeralda. I was so amazed at the rugged beauty of the land. The color looks like a clay tan, this is due to a lack of rainfall. Combined with the crystal clear water, it makes for a beautiful combination of colors.

The history is the discover Aga Khan in 1962 discovered the 35 miles coastline which has since been turned into Sardinia’s Costa Smeralda into a eco-sensitive millionaire’s paradise in the 1960s.

On this north-eastern stretch of coast, where rugged landscapes meet pampered living, the rich rarely venture far from their villas or yachts. Infamous as the summer headquarters of the Italian paparazzi, who hunt for the starlets and celebrities who flock here, the Costa Smeralda is nevertheless a romantic and dazzlingly beautiful holiday escape. I was astonished at how expensive 2 drinks cost, 60 Euros which is a typical price if you are staying at one of the several 5 star hotels.  My passion was to find Villas in Sardinia and I did. I stayed a week and I could have stayed a lifetime. It was serene peacefulness and beauty.

While there we took a sailboat across to the islands of Maddalena, closely there are smaller islands like Caprera.

Caprera is a small island off the coast of Sardinia, Italy, located in the Maddalena archipelago.

In the area of La Maddalena island in the Strait of Bonifacio, it is a tourist destination and is famous as the place to which Giuseppe Garibaldi retired from 1854 until his death in 1882.[1]

This island has been declared a natural reserve for the particular species of seabirds living on it (royal seagull, cormorant and peregrine falcon). The island’s name is linked to that of Giuseppe Garibaldi, an Italian patriot and fighter who lived in the 19th century and was one of the fathers of the Italian independence. He bought the island in 1855 and died there in 1882. His house is now a museum and a memorial chapel and the island itself is a national monument. Caprera is linked to La Maddalena island by a 600 metre long causeway.

The island was probably given its name because of the numerous wild goats living on it (capra means “goat” in Italian).

It is the second largest island in the archipelago and has a surface of 15.7 km2 (6.1 sq mi) and 45 km (28 mi) of coastline. Monte Tejalone is the highest point (212 m). On the south-western side there is a very important sailing centre and the many coves and anchorages which can be found along the coastline make the landing easy.

Many remains of Roman cargo ships as well as of the boat of Garibaldi were found there. After the Roman occupation, Caprera remained deserted for centuries before being inhabited by groups of shepherds. Later in 1855 Garibaldi decided to settle there and planted the first trees of the blooming pinewood which covers the island today. A century after Garibaldi’s death the island was freed from the numerous existing military restrictions and is now completely open to the public.

I can’t wait to go back!