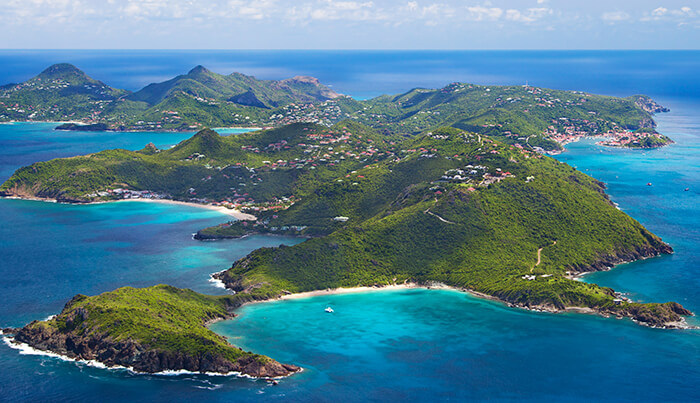 Being personally drawn to the Caribbean I have spent a good part of my life going to the Islands. I visit Saint Barthélemy, a French-speaking Caribbean island commonly referred to as St. Barts, is known for its white-sand beaches, chic hotels and designer shops. The capital, Gustavia, encircling a yacht-filled harbor, combines high-end dining with historical attractions like The Wall House, whose exhibits highlight the island’s Swedish colonial era. Perched above town is 17th-century Fort Karl, offering views of popular Shell Beach. The island is very clean and safe. It is a haven for the rich and famous, as you can often see celebrities walking through the towns. There is no airport, options to arrive vary from commuter plans from the neighboring island or private boat. There is also a ferry from St Marteen also known as St Martin. The special thing about St Barth’s is that it is particularly  safe, even as recent as in January of 2016, no one locks their doors or walks around the town with a sense of fearfulness at night. It is a nice reprieve from the U.S. and other part of the world where we have grown accustomed to being overly aware of the rising crime. This free spirited feeling coupled with the bright sea and fresh breezes, makes this Island sought out by many travelers.

Saint Barthélemy was first claimed by France, in 1648. The island was given to Sweden in exchange for trade rights in Gothenburg in 1784 and Sweden founded the Swedish West India Company. Prospering during the Napoleonic Wars, assets were low thereafter, and the island was sold back to France in 1878.

The eventual site of Gustavia was first called Le Carénage after the shelter it provided to damaged ships. According to the archives the name Gustavia appeared between December 28, 1786 and February 9, 1787. Gustavia remains as a reflection of the Swedish period.

Three forts built in the mid- to late 17th century protected the harbour: Oscar (formerly Gustav Adolf), Karl and Gustav. The Anglican Episcopal Church on the harbourfront was built in 1855 and from the town you can see the cross in the distance.

Let’s talk about the people, mostly french speaking, are very kind and happy. And what’s there to not be happy about, after all they are living in paradise. The food is also delicious, 70 restaurants in total, you can find the fresh catch of the seas (Atlantic and Caribe) as well as the local Crepes. Once you visit, it will call you back and you will yearn to return year after year.