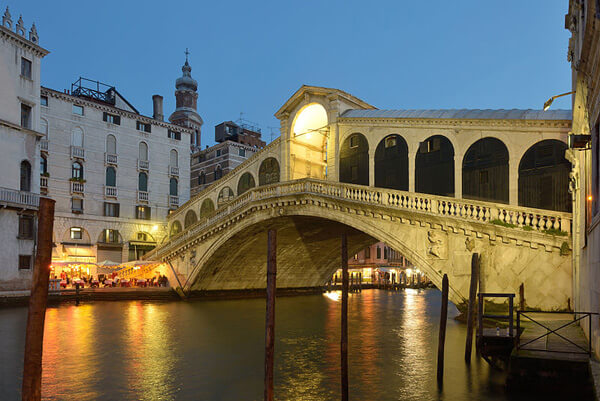 When I was in Venice I found myself at the Ponte Rialto bridge at every turn, day, night, so we sat there and had a wonderful dinner under the bridge. Watching the gondola’s gracefully float with happy tourists under the moonlit sky will always be a magical memory for me.

The history of the bridges is that it was built in 1181 by NicolÃ² Barattieri. It was called the Ponte della Moneta, presumably because of the mint that stood near its eastern entrance.
Detail of the bridge
The development and importance of the Rialto market on the eastern bank increased traffic on the floating bridge, so it was replaced in 1255 by a wooden bridge.[2] This structure had two inclined ramps meeting at a movable central section, that could be raised to allow the passage of tall ships. The connection with the market eventually led to a change of name for the bridge. During the first half of the 15th century, two rows of shops were built along the sides of the bridge. The rents brought an income to the State Treasury, which helped maintain the bridge.

Maintenance was vital for the timber bridge. It was partly burnt in the revolt led by Bajamonte Tiepolo in 1310. In 1444, it collapsed under the weight of a crowd watching a boat parade and it collapsed again in 1524.

The idea of rebuilding the bridge in stone was first proposed in 1503. Several projects were considered over the following decades. In 1551, the authorities requested proposals for the renewal of the Rialto Bridge, among other things. Plans were offered by famous architects, such as Jacopo Sansovino, Palladio and Vignola, but all involved a Classical approach with several arches, which was judged inappropriate to the situation. Michelangelo also was considered as designer of the bridge.

The present stone bridge, a single span designed by Antonio da Ponte, was finally completed in 1591. It is similar to the wooden bridge it succeeded. Two inclined ramps lead up to a central portico. On either side of the portico, the covered ramps carry rows of shops. The engineering of the bridge was considered so audacious that architect Vincenzo Scamozzi predicted future ruin. The bridge has defied its critics to become one of the architectural icons of Venice.

And it is something that most people want to cross when they are in Italy. It is the most photographed bridge in Venice, although there are four others, this one remains as the most popular.