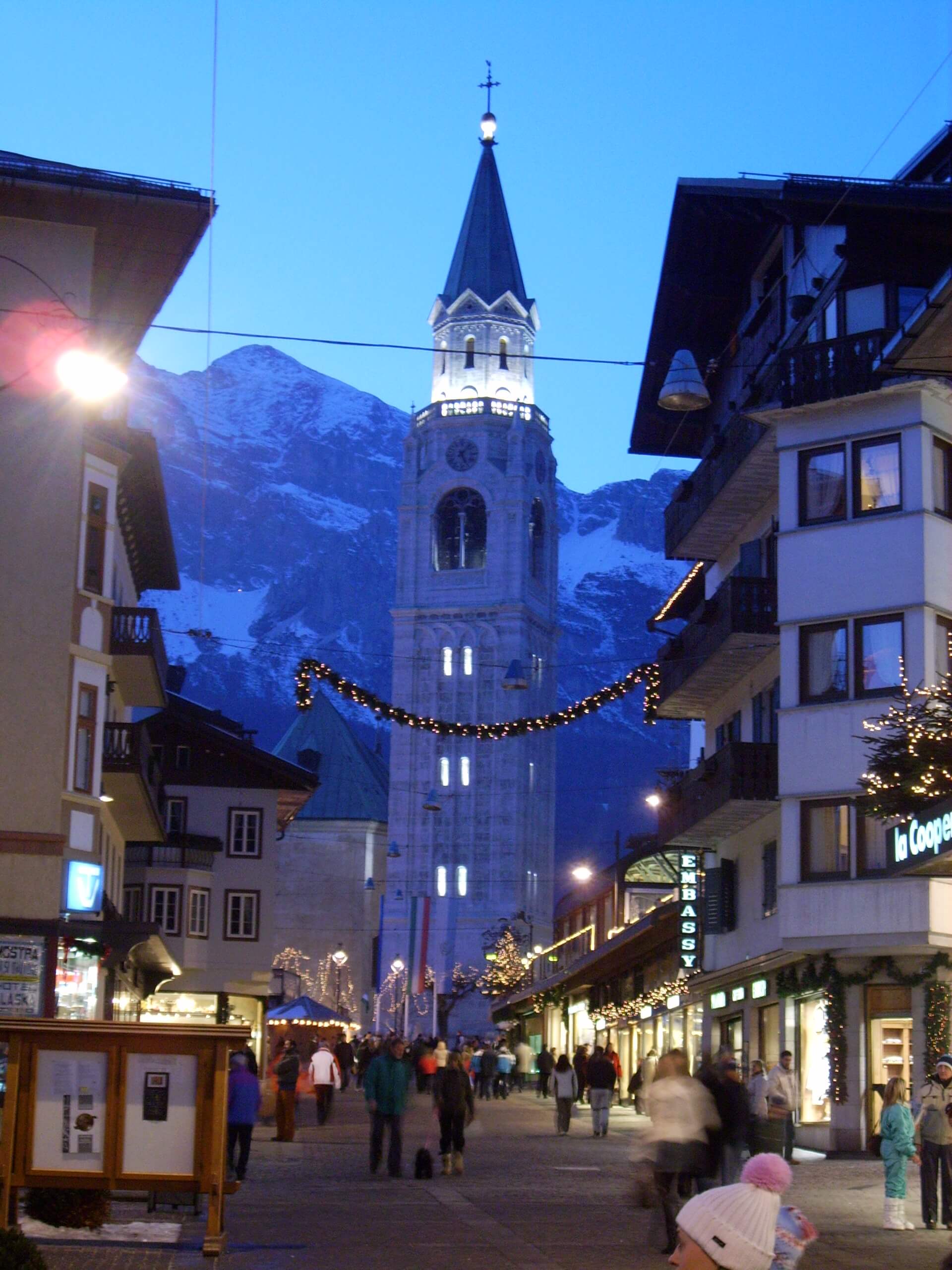 Cortina, home to the Olympics and the haven of winter sports,

First made popular by the 1956 Olympics, officially known as VII Olympic Winter Games. And on the 50th Anniversary in 2006 Welcomed the games, with the events based in Turin, another celebration and attention drawn to this spectacular part of Italy! And, on the 48th day of the Tornio Olympics the torch reached Cortina d’Amprezzo.  The torch traveled by “bob-sled:” on skies from a jump; by skaters on Lake Misurina and by horseback until it’s final destination! And prior to in 1956 –  821 athletes from 32 nations were present. In 2006 this was tripled to 2500 athletes!
A little history, Cortina d’ Amprezzo was chosen to organize the V Olympics winter games in 1944. The WWII put paid to the project. After the conflict, this resort in the Dolomites put forward its candidature again, but was pipped to the post by St. Moritz in 29148 and Oslo in 1952. Cortina would have to wait 12 long years before holding its games!

The Basilica Minore dei Santi Filippo e Giacomo was built between 1769 and 1775 on the site of two former thirteenth and sixteenth-century churches; it is home to the parish and the deanery of Cortina d’Ampezzo. It high wooden altar, crowned by a figure of Christ the Redeemer was carved by Andrea Brustolon. On the ceiling are three frescoes by Luigi Ghedina: “Christ Purifying the Temple”, “The Martyrdom of St. Philip and “The Beheading of St. James”. The Chiesa della Madonna della Difesa was built in 1750 on the site of a ruined fourteenth century building. Its fascade features an intricate fresco depicting the Madonna della Difesa, and the interior is decorated with a wealth of statues, paintings, polychrome marble and gold leaf.

Basilica Minore dei Santi Filippo e Giacomo:
The Cappella della Beata Vergine di Lourdes (Chapel of Our Lady of Lourdes) was completed in 1907. Decorated by artist Corrado Pitscheider of the Val Gardena, it is a small church of particular interest given the reconstruction sculpture. The Cappella di Sant’Antonio da Padova in the village of Chiave was completed in 1791 but the interior was renovated in 1809 after serious fire damage caused by the Napoleonic troops. The furnishings include two wooden busts (Christ and St Catherine) and a richly worked altar.

Sacrario militare di Pocol (also known as Ossario di Pocol) is a cemetery and shrine located at an altitude of 1,535 metres (5,036 ft) towards Passo Falzarego, in the locality of Pocol. The small church and cemetery was built in 1916 as a military cemetery by the 5th Alpine group. A shrine was built in 1935 as memorial to the thousands who lost their lives during World War I on the Dolomite front. It is a massive square tower of stone, clearly visible from the entire Ampezzo valley below. In a crypt in the centre of the structure rests the body of general Antonio Cantore, who was awarded the gold medal for military valor.

Forte Tre Sassi
The Castello de Zanna is a small fortress, situated in the frazione of Majon. It consists of low white outer walls and two white corner towers, with a small chapel dedicated to the Holy Trinity. The construction of the castle began in 1694, but on August 19, 1696 the works were interrupted; the building remained unfinished in 1809 when it was burned by French revolutionary troops who had invaded Ampezzo. Since then the castle has undergone restoration.

Forte Tre Sassi (or Forte Tra i Sassi) is a fortress constructed in 1897 during the Austro-Hungarian period on the Passo Valparola. It lies between Sass de Stria and Piccolo Lagazuoi, dominating the passage between the Passo Falzarego and Val Badia in South Tyrol (Alto Adige). It was part of the large complex of Austrian fortifications built on the Italian border in the late nineteenth and early twentieth century. Rendered unusable due to a bombing by the Italians on 5 July 1915, the ruins remained in a state of disrepair until the advent of the 21st century, when it was restored by the local administration of Ampezzo, with the assistance of the Lacedelli family. The fort houses a museum containing relics related to the First World War.

Castello di Botestagno: (also known as Podestagno) was a medieval fort perched on a rock in the valley of the river Boite. It is believed that it was first erected as a stakeout during conflict with the Lombards between the seventh and eighth centuries, with the aim of dominating the three valleys that converge beneath it: the Boite, the Val di Fanes and the Val Felizon. The corner stone, however, probably dates to the 11th century. It was held by the Germans until 1077, and then by the patriarchs of Aquileia (12th century) and Camino (13th century), until Botestagno became the seat of a captaincy. It then passed into Venetian hands and finally to the Habsburgs. During the eighteenth century the castle lost importance gradually, until it was auctioned in 1782 by order of Emperor Joseph II. Today the fort has now almost completely disappeared; only the remnants of what must have been the wine cellars and the foundations remain, now weathered and largely covered up by vegetation.[68]

Culture:
Music is important to the locals of Cortina, with a guitar found in most houses, and young musicians are often found walking the streets. Every year, from the end of July to early August, Cortina hosts the Dino Ciani Festival and Academy. It is held in honour of the celebrated Italian pianist Dino Ciani (1941-1974) who died when he was only 32. The festival attracts young pianists from around the world who are able to benefit from classes with some of the world’s leading performers. The Festival of the Bands is another annual musical event featuring brass bands from Italy and beyond during the last week of August. Cortina’s own band, parading in traditional costumes, is a central attraction dating back to 1861. Cortina d’Ampezzo hosted the 1953 Miss Italia contest, won by Marcella Mariani. Traditionally, on the eves of the festivals of Ascension, Pentecost, Trinity and St Philip and St James, the youth of the town would climb the hills at sunset and light fires.

After Ernest Hemingway’s wife Hadley lost a suitcase filled with Hemingway’s manuscripts at the Gare de Lyon in Paris, he took a time off. He began writing that same year in Cortina d’Ampezzo, writing Out of Season.

The dominant religion in the comune of Cortina d’Ampezzo is Roman Catholicism. Among the religious minorities, mainly a result of recent immigration, there is a small community of Orthodox Christians and Muslims. There is also a congregation of Jehovah’s Witnesses, which has its headquarters in Pian da Lago.

The surroundings of Cortina have been the location for a number of movies, including mountain climbing scenes for Cliffhanger, Krull and The Pink Panther. The resort was a major location for the 1981 James Bond movie For Your Eyes Only. Aside from Roger Moore’s James Bond meeting the character Luigi Ferrara (John Moreno) at the peak of Tofana, and a stay at the Hotel Miramonti, a number of action sequences were shot in the town involving Bond and Erich Kriegler (John Wyman), as Kriegler competes in the biathlon. The battle culminates in one of the famous ski chase sequences in film, where Bond has to escape Kriegler and a crew of assassins on a spike-wheeled motorcycles, his route taking them all onto the bobsleigh run. The actual town centre was also the scene of the first attack on Bond and his partner Melina Havelock (Carole Bouquet) by two motorcyclists who attempted to run them over, only for Bond to eliminate them both, putting one of them through the window of a local florist

Cortina Dolomiti
Cortina d’Ampezzo was the host town of the 1956 Winter Olympics. The 1944 Winter Olympics were also scheduled to be held in Cortina, but were cancelled because of World War II. The 1927 Nordic, 1941 Nordic and 1941 Alpine World Skiing Championships were held in Cortina as well, although the 1941 Nordic championships were withdrawn by the FIS in 1946.[76] The region lost the bid for the 1988 Winter Olympics to Calgary, Canada and the 1992 Winter Olympics to Albertville, France.
The Olympic ski jump
Cortina also offers excellent skiing facilities for amateurs, thanks to its central position among the 12 resorts of the Dolomiti Superski area. Cortina itself has 115 km (71 mi) of ski pistes with 34 ski lifts and guaranteed snow coverage of over 95% from December to April. There are six ski schools (two for cross-country) and some 300 instructors. The Faloria-Cristallo-Mietres ski-area with spectacular views over the Ampezzo Valley is suitable for skiers of all levels including children. The Tofane area offers more challenging opportunities from an altitude of 2,500 m (8,200 ft) with the Canalone and Schuss ski runs. The longest and most spectacular ski run, the Armentarola piste in the Lagazuoi-5 Torri area, starts next to the Lagazuoi refuge at a height of 2,752 m (9,029 ft) and can be reached by cable car.

Facilities also exist for cross-country skiing, including a long stretch of the old railway line. In and around Cortina, there are opportunities to participate in many other winter sports such as curling, ski mountaineering, snowboarding, sledding and extreme skiing. In the summer months, sports include trekking, biking, rock climbing, tennis, golf, swimming and ice skiing.